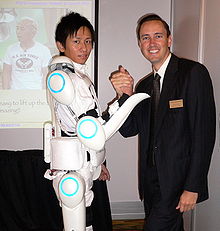 Robot Exoskeleton. Medical robots are one of the most useful applications of robotics in our era. These medical robots are used in various medical purposes—from complex surgeries to assisted recovery and post-operative therapy. They can come with very complex coding and language or a simple operational mechanism. One example of these is the wearable exoskeleton that helps patients become mobile again after a period of immobility from an accident or injury.

One patient who was able to benefit from this wearable medical robot is the 31-year-old Sarah Anderson. Anderson has been unable to walk since she was hit by a drunk driver last 2003. With the aid of her wearable exoskeleton, she was able to walk again.

The exoskeleton resembles something one can see in a science fiction or superhero movie. A battery-powered bionic device is fitted around the lower extremities of the individual. This wearable robot does not automate the wearer, rather it balances the body position of the wearer to allow the hip and the legs to move.

Generally, the robot exoskeleton allows the wearer to do the movement by giving the needed 'locomotive' assistance. This device is configured for specific walking parameters with the help of a physical therapist. This is also done to properly configure the device to allow the wearer to take steps, sit, and stand. This exoskeleton gives the wearer a walking speed of up to one mile per hour.

This wearable exoskeleton started out as a military equipment, but when the brother of the company owner who develops these devices fell into an injury and was temporarily, they decided to shift their focus from military to medical. Esko Bionics aim to help and support people who have become immobile due to injuries and accidents to regain mobility.
With this new wearable exoskeleton robot, people who have seem to lose hope in become mobile again can regain their self-esteem and hope of one day, being able to walk again.

The wearable robot exoskeleton is just one of the newest breakthroughs that this era has seen in the field of medical robotics. Soon, more and more medical robots will come to rise and help doctors and patients alike to improve medical procedures and recovery. If this is the future, I like! First comes the powered exoskeleton, and in a few years time will come the powered "endoskeleton", an internal version of the same hardware. No more wheel chairs. The Bionic Man lives!