Lost in Space Robot:
Model B9 - The Story 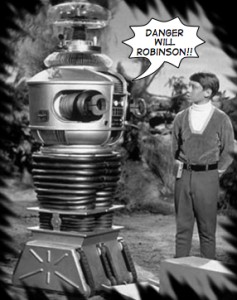 The Lost in Space Robot. One of the most beloved robots in the history of TV robot stars first appeared in a TV series which came out in the 1960s. The Lost in Space Robot (never called "Robby the Robot") got his start in a space adaptation of the novel The Swiss Family Robinson. The plot centers around an astronaut family, accompanied by an air force pilot, and a silver robot who all leave the overpopulated Earth in a spaceship called Jupiter 2 to colonize a planet circling the star Alpha Centauri.

This plan is sabotaged by a scheming doctor who secretly climbs aboard with evil plans to destroy the ship and crew using the robot. They eventually crash on an alien world identified as Priplanis, where they begin a host of adventures. This series was called Lost in Space, and it spawned some of the most memorable sci-fi characters ever in television. 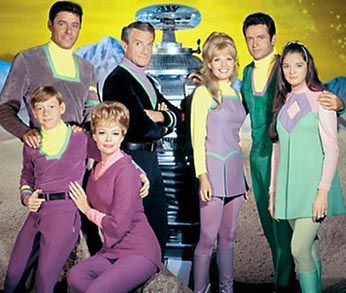 Apart from its cast of humans, which included child star Bill Mumy as Will Robinson and Jonathan Harris as Doctor Zachary Smith, Lost in Space is fondly remembered for its robot character, simply called "The Robot" and later on "Robot B9", after its model series.

This robot produced several popular catchphrases in pop culture, among them, “I cannot accept that course of action,” “That does not compute” and “Danger, Will Robinson!” Dr. Smith's frequent jabs at Robot are also still remembered, especially his trademark "You bubble-headed booby!" 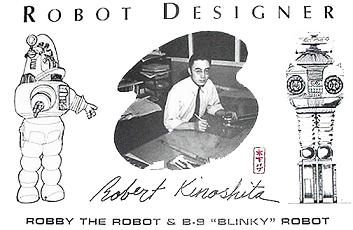 The Robot is a Class M-3 Model B9, specifically a General Utility Non-Theorizing Environmental Control Robot (GUNTER), with no given name. He is endowed with superhuman strength and a range of futuristic weaponry, giving him the ability to perform laborious tasks and fight villains when necessary. For this aspect, he has claws that could fire laser beams as well as a deadly “electro-force.”

The Robot also possesses powerful programs that provide him with extensive knowledge on a wide range of subjects, allowing him to undergo complex calculations, deduce facts and even operate the Jupiter 2 spaceship. Despite his extreme powers, the Robot exhibits very lovable human traits such as the ability to discern, laugh, mock others, sing and play the guitar.

The role of the Robot was performed by Bob May, who wore the prop costume built by Bob Stewart, although the Robot’s voice was dubbed by Dick Tufeld, who also narrated the series.

The robot was designed by Robert Kinoshita.

who also designed Forbidden Planet’s Robby the Robot. Robot B-9’s most distinguishing characteristics consisted of a glass bubble sensor unit with moving antennae on its head, a fluted, translucent ring collar (through which the performer Bob May could see), a rotating trunk section with bellow arms that could extend and red mechanical claws at their ends, controls, a removable power pack and a chest light that lit up in sync with the Robot's speech, and trapezoidal tread-tractor units at the bottom of each leg. 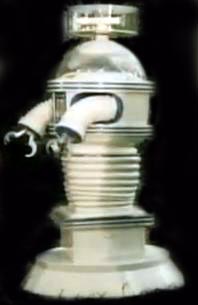 After the series stopped airing, the B-9 Robot costume was used on other shows. It was on the children's show Mystery Island as a primary character, though its appearance was slightly altered. Its legs and base had been covered by a rectangular skirt of golden tubes.

Lost in Space used two versions of the robot during filming, the one worn by Bob May and a Stunt Robot prop that could move, used for faraway or hazardous shots. Both have since been restored. The costume Bob May wore is in the private collection of producer Kevin Burns, while the 'Stunt Robot is on display at the Science Fiction Museum and Hall of Fame in Seattle, Washington.

Replicas of the robot are available commercially from companies such as B9 Creations for $24,500.

Though hobbyists can build their own versions, as the members of the B9 Robot Builders Club very passionately do. To date, around 15 detailed, full-size replicas of the Robot have been built around the world. A course of action, I believe, the original Robot would very, very gladly accept. 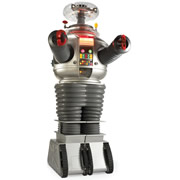 Want to build a B9? Join the B9 Builders Club!