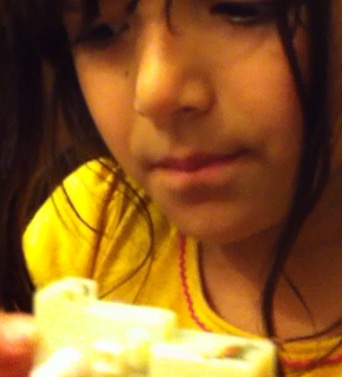 A young robot builder, named Maya from Riverside, California has been building robots now for two years. That may not sound like a lot of time until you understand that she is now only six and that would mean she started at age FOUR!

Her father a full-time computer programmer and part time robot builder, has encouraged and led her into the robotics field starting when she was just an infant. At only six months old, Maya got her first robot, a plush R2D2. She shortly moved onto remote control toys and then starting in 2010, she, with the side-by-side help of her father, put together her first robot kit, a robot lady bug. At four she just might have been one of the youngest of the youngest robot builders in the world. 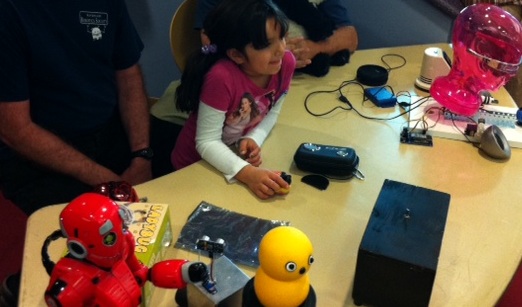 "The Future for This Young Robot Builder Looks Bright"

So far this young robot builder has, except for letting Daddy do the soldering and other dangerous operations, built three different kits. These are, a robot butterfly, a robot ladybug and a robot ostrich.

Her father has stated that he really encourages her and teaches her bit-by-bit (no pun intended) all that is needed to build and program robots. She has been able to use a screwdriver since the age of three years old he states.

"Maya at Age SIX (6) is beginning to Program an Arduino"

Now don't get it wrong, this young girl roboticist is not cooking up code like a pro, rather she has just begun to customize sample code to get her robot doing what she wants it to do.

Her father says the biggest barrier was just getting her typing. At this tender age, hunt-and-peck is the slow, but chosen typing method of choice. And now that she is attending a first grade academy school, her robot studies sometimes must take a backseat to not the BASICs, but the basics of learning the three Rs: Reading, wRiting, and aRithmetic. What's a robot-obsessed father to do?

"She Now has a New Favorite Microcontroller!"

These days, she has started a new robotic project. She is retrofitting a walking robot toy that she got a few Christmases back. She is adding servos to control the arms, neck, and locomotion. She calls her new robot friend, "Botty."

But her father got a new microcontroller a few months ago called an EZ-B. The EZ-B and it's Windows IDE EZ-Builder, by EZ-Robots.com is a visually "programmed" robotic system. Maya now has to select a control, such as a voice recognition module, type in the questions she wants to ask the robot, the answers she wants it to reply with, and then sit back and test the robot. She likes this VERY MUCH! So much in fact that she is reluctant to go back to Arduino programming.

At only six years old, she may or may not be the youngest robot builder, but Maya has had an opportunity that most children of that age do not, even here in the United States where child prodigies abound.

What does Maya want to be when she grows up? Well, that changes every time we ask her. Some of the answers we got were, an animal doctor, a mommy, and of course a robot builder. What does the future hold for this bright and plucky young lady? Only time will tell, but with her dad at her side teaching her all the ins and outs of the complicated, and highly interdisciplinary field of robotics, her future is surely to include robots of one sort or another.