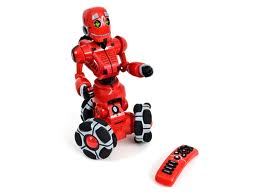 WOWWEE’S TRIBOT. The Tri-bot, Wowwee’s fast moving, fun loving and wisecracking robotic companion may be the closest thing humans can get to a robot friend, for now at least. Fully loaded with a variety of different interactive play modes, the Tribot can keep bored humans entertained for hours with his hilarious jokes, stories and side comments. The bot has an engaging personality and an animated face, making him “even more fun than your best friend.” Since coming out in 2004, he’s become immensely popular, probably due to his humanlike qualities. One almost gets the feeling he is real, from his expressive, moving head, to his animated eyebrows and blinking eyes. He is quite the joker too, equipped with a hilarious alarm that makes his human owners run after him to turn it off.

The Tribot is programmed with driving games that require you to move it around in certain patterns (Pattern, Maze, and Minefield). This is appealing primarily because of its distinctive three-wheeled base, which gives it a good range of movement. The bot also has a motion-sensing controller, which allows you to move it by simply tilting your wrist towards the direction you want it to go. Unlike its predecessor, the RoboSapien, the Tribot is fully autonomous, which means that all you need to do is turn it on and let it roam. And if you’re not too ecstatic about a small humanoid scurrying freely about your house, and want to establish some form of control, this robot also comes with a remote control.

On its three wheels the Tribot is pretty agile, dashing forward, backward, sideways and around. On the downside however, the bot's tilt sensors are unable to detect anything on the floor below its chest, and it occasionally topples over when trying to climb walls (although he is capable of telling you to pick him up and set him back on course when this happens). Among the robot’s other features are its program mode, which allows you to store a sequence of up to 40 program steps, a homing function and standby and sleep modes for battery conservation.

This robot is from WowWee Robotics, one of the biggest known companies in the consumer robotic and electronic product development. It is their improved version of the popular Robosapien, a breakthrough, award winning robot that captured the heart of robot fans with his technology and personality. The Wowwee company is founded by Canadians Richard and Peter Yanofsky, and began as a Hong Kong-based company in 1982. Originally an independent research & development and manufacturing outfit that manufactured and sold original equipment like the Power Rangers Power Gloves and the Talking Tots dolls, they decided to build and market toys under their own brand when orders began to dwindle in 1987.

Because of their Robosapien’s popularity, Wowwee introduced two more members of the Robosapien family, the Roborover and Joebot robots in 2009. The Roborover robot is an inquisitive, adventurous, talking and roving explorer on a quest to uncover hidden treasure and other imaginary riches. It is equipped with tread-based caterpillar tracks and remote controlled headlights that allow him to move through all sorts of indoor terrain and in any condition. The Joebot robot, on the other hand, is far from you average Joe. He’s a walking, witty interactive companion who can dance and crack jokes, and is the first among all WowWee robots to feature voice commands. Speak within earshot of Joebot’s sound sensor and he will immediately launch into whatever it is you want him to do, whether to sing and dance, play a game or perform a brief stand-up comedy act. One of his most amazing features is his ability to beatbox: tap out a rhythm and he will jam along with it, breaking out into dance as he does so.

Wow. I guess these new robot buddies really are cooler than most human friends.