Search and Rescue Drones to the Rescue 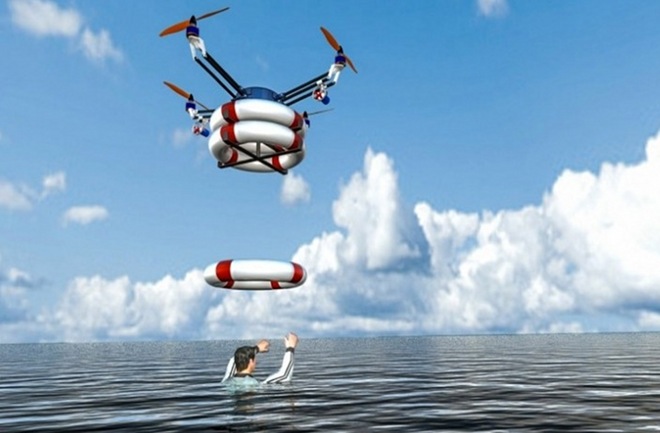 Search and Rescue Drones! Rescuing a person who’s drowning at sea is now made easier, faster and a lot safer with robot drones. Robot drones are another technological innovation which is bound to revolutionize the way we act upon on sea accidents and marine tragedies.

A lot of people have heard of military drones, but these rescue drones are something special.

Just recently, Pars, the seafaring Savior Arial Robot, has been launched. It was designed based on a quadrotor concept which could to save individuals who are drowning at sea.

Pars was the brainchild of a team of inventors and scientists at RTS Lab in Iran and is complete with three life-saving devices, simulated knowledge, sound and image processors, autopilot search-and-rescue programming, and different sensor technologies.

Pars is there to rescue you if you ever fall overboard or swim out too far or too deep in the dark. Pars has a heat-sensitive camera that will make it easier for this device to look for you even in the middle of the night. It also has a built in LED lighting which will help victims located it while scouting the seas. Victims can shout at Pars whenever they see it coming. Developers are now working on developing its intelligence system to automatically drop a life preserver after hearing the victims call.

Pars can also detect GPS positioning and return from its rescue mission even if users don’t guide it.

But aside from Pars, you might also expect to see another robotic drone that might rescue you in the near future.

Justin Thomas spearheads the team of University of Pennsylvania’s experts who are currently working at the GRASP Lab to develop a bird-like Search and Rescue Drone. They take the birds of prey that swoop down and seize fish from water. This aerial vehicle (UAV) is yet unnamed but it’s got a '3D-printed' talon-like gripper to save your life.

The team has already designed a prototype quadrotor that grips objects on air while the aerial vehicle is flying. The team is currently working to develop this innovation. In fact, they are studying the way an eagle catches a fish and they have noticed that birds actually swing their legs and claws backwards, while gripping their prey using their talons. This technique makes it easier for eagles to grip a meal in one dive-bombing swoop even without slowing down.

The team has succeeded in duplicating the eagle’s movements using 3D-printing, to replicate the three-fingered claw, and fasten it to a four-inch robotic leg. The team also is securing the appendage in the UAV’s center of mass, which enables the drone to grasp moving objects even while on air.