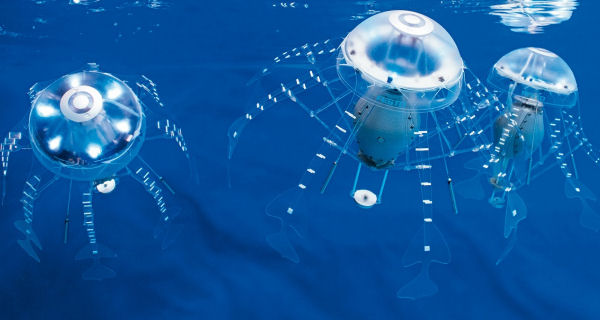 Mechanical engineers at Virginia Tech College of Engineering have been spending quite some time designing and creating this autonomous robot jellyfish which they explained could become the best pal we’ve ever got when it comes to monitoring ocean conditions, mapping ocean floors and studying marine life.

Last year, the team the team has designed a prototype. It’s a small, hand-sized invention named RoboJelly. Following the success of their first work is a larger prototype, which they affectionately named Cyro.

Cyro is composed of a mechanical system. And like a jellyfish, it has eight arms and linear actuators, which are controlled by gadgets inside the bowl-shaped device. Cyro is powered by a rechargeable nickel metal hydride battery while its skin is totally made of silicone that hovers together with the robot. This makes it very jellyfish-like.

Cyro measures 5 feet 7 inches, but it weighs 170 pounds. However, the weight does not hinder it from moving smoothly under the sea. But why jellyfish?

The inventors explained that jellyfish are among the more energy efficient creatures of the sea. They are also versatile enough to blend with different marine conditions. The lion’s mane or Cyanea capillata, a type of giant jellyfish, served as the inspiration for Cyra.

The project is spearheaded by Shashank Priya, with support coming from the U.S. Naval Undersea Warfare Center and the Office of Naval Research.

Priya explains that this endeavor chiefly aims to bring a fuller understanding of the basics of “propulsion mechanisms” which is widely utilized in nature. Priya, who works as an associate professor of mechanical engineering and materials science and engineering at Virginia Tech, takes pride that this cutting-edge technology could be used to full advantage in various fields, including military surveillance under the sea, oil spill cleanup, as well as marine environment checkups.

The above mentioned tasks, indeed, seemed insurmountable and time consuming. That is why, Priya and Team looks forward to seeing Cyro operate underwater uninterruptedly and without any problems for up to several months. That is why, the team keeps on improving and refining this technology to address certain issues, like minimizing energy consumption and boosting swimming abilities with the help from other partner universities.