Robot Supplies and Parts and Kits

Robot Supplies and Parts and Kits 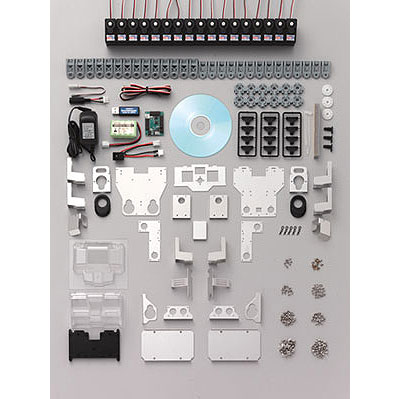 Creating your own robot is never easy, but thanks to the accessibility of the internet, finding the robot supplies and kits you need is. Several online sites offer a wide selection of robot kits and development platforms, from beginner models to more advanced ones.

The Robot Shop site says that “building a robot from a kit is the perfect way to learn about robotic technology.” Robot building is definitely appealing to both adults and kids as the whole process employs concepts in “physics, mechanics, electronics and artificial intelligence.” Some of the site’s beginner kits include toy robots like the Beetle Robot kit, an infrared remote controlled mechanical robot, a sound detecting robot called the Follow Me Robot and the Dagu 2WD Beginner Robot Chassis. The site also sells intermediate to advanced robot kits, as well as development platforms. And to avoid having to design and build an entire robot from scratch, the Robot Shop conveniently carries a wide selection of specialized robot parts. As such, you could quickly build or modify a robot, and make it more professional, intelligent and adaptable to its environment.

For complete robot supplies, one can go to the VEX site. VEX Robotics sells special VEX Classroom Lab Kits, educational classroom equipment intended for student learning. Classroom Lab Kits are popular with schools as it includes everything needed to design, build, power and operate robots, using either the PIC Microcontroller or the advanced and more powerful Cortex Microcontroller. Furthermore, there is an option for students to increase their challenge levels with expansion kits for advanced sensors, drive systems and pneumatics. Definitely no boring science lectures with these kits around.

This author has purchase a large number of parts and kits from VEX. While at the higher end of the cost scale, VEX offers a complete solution. Every servo fits and can be screwed down tightly to VEX hardware. All items are spaced in SAE (non-metric) and all servos and sensors just plug into the VEX micro-controller. The courses that are packaged with EVERY ITEM, take a student and make a roboticist out of him or her.

Another exciting site, Solarbotics harnesses the power of alternative energy and offers robot kits, solar-powered robots, books, electronic components, motors, parts and information on the expanding field of BEAM Robotics, an acronym coined by Mark Tilden in 1989. It is a technique that combines simple, robust electronics with clever mechanics and solar power to produce capable and autonomous robots. The design philosophy of BEAM stands for Biology, Electronics, Aesthetics, and Mechanics, and is basically a robot-building technology that is cheaper, more robust, and quicker to build than traditional methods. Solarbotics is proud to have brought their unique robot-building technique to a great number of hobbyists, educators, and researchers, all of which could now build robots without need of a programming environment or host computer. The site sells kits for any skill level, and everything from parts to electronics to accessories to solar cells.

Another online robot supplies site, Pololu Robotics & Electronics offers an extensive line of robot kits, electronics, tools and mechanical components but has a unique robotics forum open for interacting with Pololu engineers and a whole community of robotics enthusiasts about the site’s products, projects, electronics and robotics in general. The site also sells Tamiya products from the Japanese manufacturer of a variety of high-quality hobby and educational products. Pololu sells their educational construction kits, including gearboxes, wheels, and robot kits. They also provide services such as custom laser cutting and SMT stencils.

Servocity specializes in Hitec and Futaba servos, radio systems, and other related electronics. They are well equipped in other motors, software, servos, linear servos (great for getting robot model B9's arms in and out) and electronics accessories too. They have pan and tilt mechanics, which can be used for robot arms and legs. They also sell unique servo gear boxes that can increase a servo's torque by thirteen times. Instead of ounce inches you wind up with foot-pounds!

They have recently added two new SUPER SERVOS called the MS530-2 Mega Servo, and the MS530-2 Mega Servo, claiming an unheard of torque of 2000 and 4000 oz/in (approx. 10 and 20 FOOT POUNDS)respectively. These supers servos are great for life-size robots where one needs that extra push. Be careful though, 10 foot pounds can break a finger if your finger gets stuck in the wrong place.

Love robots for real? A few clicks on your mouse and you can start building one today.