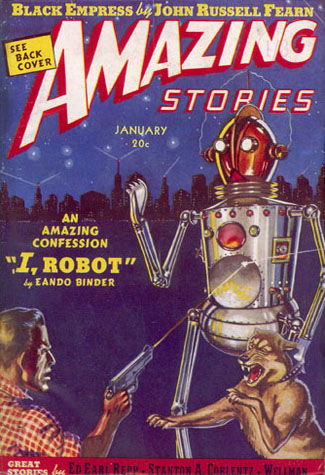 Robot fiction is becoming bigger and bigger. On this page you will find links to fictional stories about robots and androids / humanoid robots. There will be robot love, robot rejection, robot anger, robot feelings, all and all in a fictional setting. Robot stories are a relatively new branch of science fiction in general.

The Wikipedia has this to say about robot fiction and more generally, science fiction (sci-fi)

"Science fiction is a genre of fiction dealing with imaginary but more or less plausible (or at least non-supernatural) content such as future settings, futuristic science and technology, space travel, aliens, and paranormal abilities. Exploring the consequences of scientific innovations is one purpose of science fiction, making it a "literature of ideas".

"Science fiction is largely based on writing rationally about alternative possible worlds or futures. It is similar to, but differs from fantasy in that, within the context of the story, its imaginary elements are largely possible within scientifically established or scientifically postulated laws of nature (though some elements in a story might still be pure imaginative speculation)."

This first fictional story, and we will plan to have a new robot story every month, is about our lovely Robot Betty9. In this story she works for the Google Asteroid mining on an asteroid in the middle of the galaxy. Betty is in love with her creator. He doesn't believe she can love. Can she ever get him to believe that she is more than a series of complex computer programs?

Who wrote the first fictional robot story? Well, Brian Aldiss has argued that Mary Shelley's Frankenstein (1818) was the first work of science fiction. And by some standards Frankenstein's monster might be considered a bio-robot. Still the common garden variety fictional sci-fi often contains all machine, all electronic types of robots including our lovely Robot Betty9.

A couple of tidbits from the story:

"Some viewed that many robots as a threat to the human workers, while others took great offense to the fact that thirteen of those robots appeared little different from humans, and could satisfy the sexual needs of the human colonists."

"Mark Sunrun, Director of Robotic Programming, who had commandeered one of the thirteen humanoid robots and inserted code of his own, granting it a higher level of artificial intelligence both to create an intellectual companion and to test his own skills. The result, Robot Betty9, had exceeded his expectations in ways that he’d never thought possible."