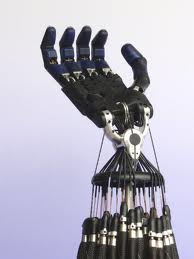 A presentation given by Thomas Messerschmidt to the Robotics Society of Southern California.

“In robotics, an end effector is the device at the end of a robotic arm, designed to interact with the environment.”

A robotic end-effector is any object attached to the robot flange (wrist) that serves a function.

There are MANY, MANY types of robotic end-effectors. When referring to robotic grasping of objects there are four general categories of robot grippers:

1. Impactive – jaws or claws which physically grasp by direct impact upon the object.

2. Ingressive – pins, needles or hackles which physically penetrate the surface of the object (used in textile, carbon and glass fiber handling).

4. Contigutive – requiring direct contact for adhesion to take place (such as glue, surface tension or freezing)

There is quite an array of end effectors just in the industrial field of robotics:

NASA has two robots famous each with different end effectors:

First there is Dextre who has built-in grasping jaws and a retractable socket drive. And then there is the newest robot to join NASA's team is Robonaut and his end effectors are human-like hands. These two robots have been in space doing NASA's bidding for some time now. Their ability to grasp makes them invaluable to the astronauts and the entire NASA space program.

In the field of medicine, the tele-operatoed da Vinci medical robot has what it's maker calls “tool tips” which include:


Largest Industrial Robot in the World