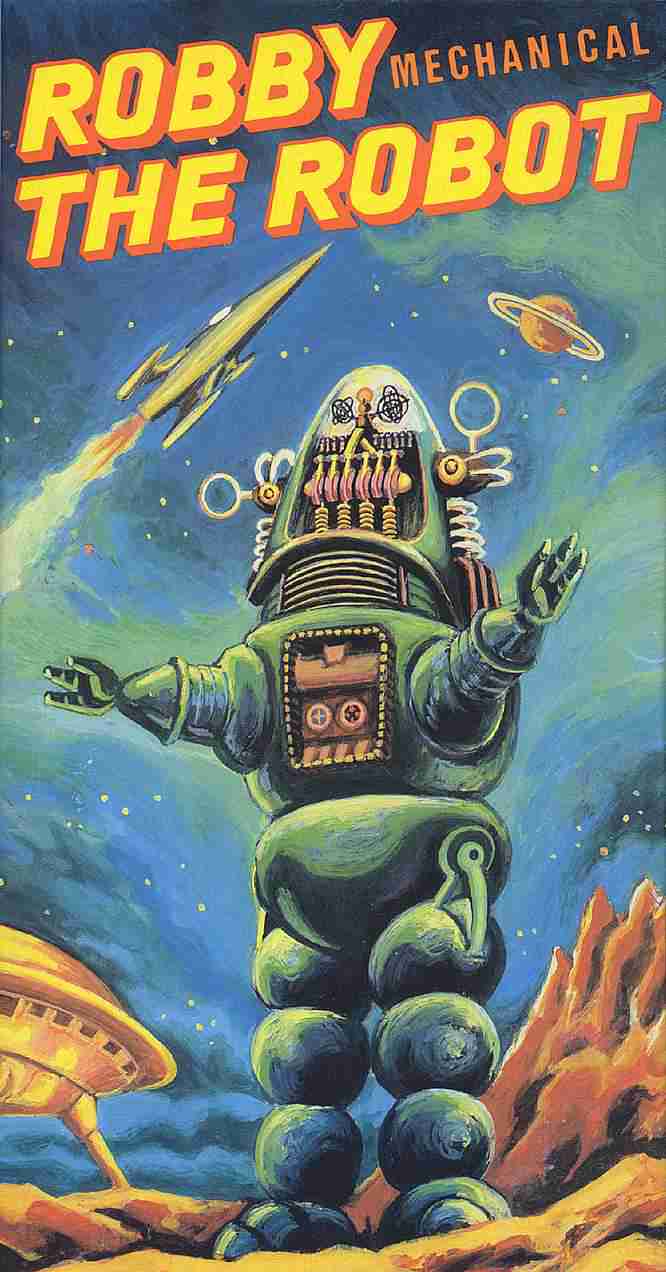 ROBBY THE ROBOT TOYS. One of history’s best loved characters of all time, Robby the Robot is a collector’s item for any robot enthusiast. Who wouldn’t want a replica of a genuine science fiction icon in their home? After first appearing in the1956 MGM science fiction film “Forbidden Planet,” Robby the Robot made a number of appearances in other movies and television programs, making him one of the industry’s most recognizable robots.

In the film, the 6-foot, 11-inch tall fictional robot was programmed to obey Asimov's Three Laws of Robotics. This knowledge becomes important near the end of the film when Robby refuses to kill the “id monster” because the robot recognizes that the creature is an extension of Dr. Morbius, and therefore cannot be hurt or killed.

Inducted in the Robot Hall of Fame in 2004, Robby is available for fans and collectors in a variety of forms, usually in online sites like ebay or Amazon. There are rare 1996 talking Robby the Robot toys made in Japan by Masudaya, which is exactly the same as the 1983 version except for the box. This model is 16" tall and comes complete with the original box, instruction sheet, extra set of interchangeable hands and a set of small clear plastic parts for use on his head.

The mouth features a blinking light with a talking function: Pushing the button on its body will allow you to hear Robby say either of these three sentences: “Welcome to Altair 4 Gentlemen. I am to transport you to the residence,” “If you do not speak English, I am at your disposal with 187 other languages along with the various dialects and sub-tongues,” and “For your convenience I am monitored to respond to the name ‘Robby.’”

A 1997 version, also by Masudaya stands over two feet tall, which is one of the biggest Robby robots created. Like the 1996 version, this Robby has interchangeable hands and has lights in his mouth that blink while he talks. This one is on sale for $699 on ebay. Other talking versions also include the phrases, “A genuine privilege commander,” “Quiet please! I am analyzing," and "And what is it you require this time?”

The less expensive alternative is the Robby the Robot Silver for $109. This Robby stands 10" tall, with actions that include a sparking, spinning lithographed dial, mechanical walking, and rotating scanner rings. The toy is all-tin, is manufactured by Osaka Tin Toy Institute and comes with a beautifully lithographed box. Another one from the same manufacturer is Robby the Robot with Blaster, a dynamic 13" tall robot with multi-action and highly detailed features.

Robby's functions include mechanical walking, blinking lights on his dome, chest and voice tube. Piston valves bounce up and down and scanner rings spin on each side of his head. When Robby stops moving, his blaster light blinks and makes a firing sound. This limited edition toy comes directly from the Japan for $439.

Robby the Robot Toys come in a verity of figurs. Another interesting Robby toy is produced by X-Plus, Japan. This is the first Robby the Robot collectible figure produced that pays homage to the man inside the machine, Frankie Darro, who was the stunt performer inside Robby's suit. (Marvin Miller played his unique monotone voice). Each version of this Robby the Robot toy includes an articulated, dressed, “Frankie” action figure.

The robot stands over 13" tall and is available for $425. For $100, fans can also avail of an easy-to-assemble plastic model of Robby that comes with concise, fully illustrated instructions. Once constructed, Robby will be seen with his pincher arms extended, measuring 8.5 inches tall on a plastic space-rock stand. The set also comes with a detailed painting guide. There are also Robby the Robot bobble heads made of a composite of two types of plastic, in chrome and gun metal gray colors for $10.

Now if your biggest dream in the world is to have a real Robby Robot in your house and have been saving up all your life for it, then by all means go for the life-sized replicas by “robot man” Fred Barton. The 7-ft. tall model has a fiberglass body retooled from the original, and is fully mechanized with animatronics and a remote control. All of its mechanisms are hand-made. It will, of course, cost you all your arms and legs, but maybe you can make do with Robby’s mechanical ones in exchange.

As robots in films today become more and more polished and sophisticated, thanks to the wonders of computer graphics and 3D, full-suit robots like Robby the Robot will soon become a thing of the past Make sure you get to own a piece of history while it’s still available, because, pretty soon, even the Robby the Robot toys may all be gone.