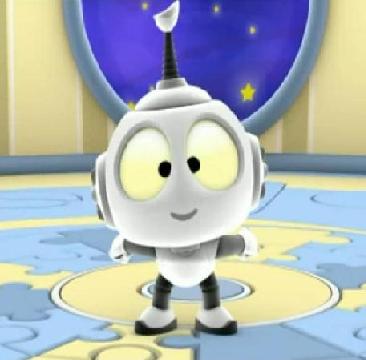 The new show premiered in the Southeast Asian region in November 2011 on Disney Junior. The CG animation show is based on a popular series of Australian books about a robot child's unflagging mission to experience fun while learning.

The show's hero, a robot named Rob, is basically a mechanical stand-in for a four year old child. Rob and his young space explorer friends TK, Ema, and Orbit go on thrilling and educational adventures as they travel from planet to planet in the Robot Galaxy.

In each episode, Rob and his faithful crew are tasked with solving a problem. To do so they must take on a mission to visit a planet that can provide what they need to come up with the solution. So in one episode, the crew must find a musical instrument, and thus they go to the Band Planet. In another one, they have to learn how to tell time, and so they visit the Clock Planet.

Fifty-two episodes, each running 11 minutes in length, are scheduled to be broadcast. The show was originally commissioned by a Canadian company, TVO Kids.

The first season of the animated series started airing in Canada last summer, and the second season is now under production. The show is a co-production by One Animation of Singapore and Amberwood Entertainment of Ottawa, Canada.

One Animation is an independent 3D animation studio founded by Steven Read, who was a technical director for the CGI animated film "Happy Feet."

One Animation is managing the licensing and merchandising of the show, especially in Asia. However, the licensing and distribution of the property in other parts of the world is being handled by the Entertainment One Family; eOne has forged major broadcast deals with distributors in South Korea and Europe. The Korean deal is with the EBS network. The European deals are with NRK in Norway and Lagardere in France, where it will air on Tiji, the pre-school channel.

One Animation has indicated that a game for the iPad/iPhone will be released sometime this year. The licensing of the show to Disney Junior Southeast Asia is just one step in an ongoing push to popularize the Rob the Robot brand throughout a wide range of media, including games and books.