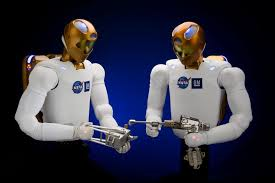 "To improve life here, to extend life there, to find life beyond."

NASA Robots. Since it was launched in 1958, NASA has stayed true to its mission of pioneering the future in space exploration and aeronautics research. NASA’s remarkable scientific and technological feats remind us that while we humans are capable of achievements once considered impossible, our planet is still but one tiny speck in the infinite cosmos.

One of NASA’s most popular achievements is the Project Apollo Moon mission, the United States’ $40B effort to prove its scientific and technological superiority over Russia, its cold-war-turned-space-race nemesis. On July 20, 1969, Neil Armstrong stepped on the Moon's surface and forever changed the way we look at space. The words, "That's one small step for [a] man, one giant leap for mankind" were then imprinted on every American’s memory.

But NASA has not only sent people, mice, monkeys and mummichogs (a kind of fish) out into the great beyond. Not surprisingly, the distinction of being the first “American” in space actually belongs to a robot, in the form of space probe Explorer 1, which first orbited the Earth on January 31, 1958. Explorer 1 was the first Earth satellite of the United States, and the first in a line of space robots to dutifully serve in subsequent NASA missions of space research and exploration.

These unmanned, automatically guided NASA robots–usually rovers, satellites or probes–are used to augment, aid or substitute for astronauts in rote or difficult tasks, as well as in risky environments. Repairs, scientific measurement and routine procedures are usually done by these robotic crafts under telerobotic control, as telerobotics present lower costs and risks compared to sending human crews. Aptly called scout robots, these telerobotic probes take photographs of new areas, calculate dangers and measure the terrain on asteroids and planets, making it easier for NASA scientists and engineers to develop more efficient exploration plans for planets that are too distant or too hostile for humans.

One notable space probe is Mariner 9, a space orbiter that helped in the exploration of Mars . It was launched on May 30, 1971 and reached Mars in about 6 months, becoming the first spacecraft to orbit another planet. After months of dust storms, the probe finally managed to successfully send back detailed pictures of the red planet’s surface. Although Mars rovers like Viking 1 and Viking 2, Spirit and Opportunity have since discounted the presence of Martian life, the planet’s geological history is still under intense study. Recently, NASA declared that the discovery of water ice on the planet makes it possible that some form of life did, or does, exist.

On September 5, 1977, NASA launched the probe Voyager 1. It is still currently operational, making it the longest-lasting NASA mission to date. Voyager 1 has made trips to Jupiter and Saturn, and provided clear images of these planets’ moons. On March 2, 1972, Pioneer 10 was launched, the first satellite to pass through the asteroid belt and return detailed photos of Jupiter.

Also in use are NASA robots that are only robotic arms. These mechanical arms are capable of moving large objects and loads weighing up to 29 tons in space. There is the Canadarm robotic arm on the Space Shuttle and the Canadarm2 at the International Space Station. Functions of these arms include releasing or recovering satellites, and even holding the Hubble Space Telescope to repair it. These robotic arms have been used in handing segments and adding new parts for assembly in the International Space Station. A smaller, robotic arm and "hand" named Dextre is found on these arms, capable of handling smaller jobs, such as the delicate manipulation of objects outside the station. Thanks to Dextre, the number of space walks has been reduced, allowing the International Space Shuttle crew to better maintain and upgrade their station.

These space rovers, landers and arms are no doubt impressive, but the most exciting than any other of the NASA Robots by far to be developed and employed by NASA is the Robonaut. Built a decade ago Robonaut is a humanoid robot designed to function as an equivalent to humans during space walks. His hands utilize fourteen degrees of freedom and contain touch sensors at the fingertips, making him extra dexterous and able to use space tools to perform intricate work on the Space Station. Robonaut 2, a significantly improved version of Robonaut, is set to take up residence at the International Space Station September this year. R2 as he is sometime called is said to be four times faster than R1, more compact, more dexterous, and includes a deeper and wider range of sensing than his predecessor.

“This project exemplifies the promise that a future generation of NASA robots can act both in space and on Earth, not as replacements for humans but as companions that can carry out key supporting roles. The combined potential of humans and robots is a perfect example of the sum equaling more than the parts. It will allow us to go farther and achieve more than we can even imagine today,” John Olson, director of NASA’s Exploration Systems Integration Office at NASA headquarters in Washington has reportedly said of Robonaut. The robot has also been called “the face of the shape of things to come in terms of human/robotic exploration of the solar system.”

NASA Robots are here to stay!