Lost in Space Toys : The Robot 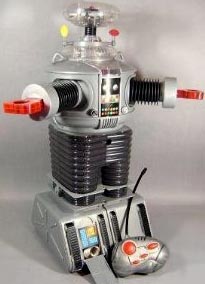 Lost in Space Toys: The Robot. Every boy who has followed the Lost in Space series must have, at one time or another, dreamed of owning that endearingly human-like Robot Model B9 robot on the Jupiter 2 spaceship from the television show Lost in Space.

Every boy wanted to be Will Robinson, if only to have a personal, barrel-shaped mechanical man that could be a constant companion, a wise elder, and a brave guardian that would warn them of any imaginary or real impending danger.

Apart from its cast of humans, which included child star Bill Mumy as Will Robinson and Jonathan Harris as Doctor Zachary Smith, Lost in Space is fondly remembered for its robot character, simply called The Robot and later on Robot B9, after its model series. This robot produced several popular catchphrases in pop culture, among them, “That does not compute” and “Danger, Will Robinson!” Dr. Smith's frequent jabs at Robot are also still remembered, especially his trademark "You bubble-headed booby!"

The Robot, a Class M-3, Model B9, General Utility Non-Theorizing Environmental Control Robot (GUNTER), with no given name is endowed with superhuman strength and a range of futuristic weaponry, giving him the ability to perform laborious tasks and fight villains when necessary. For this aspect, he has claws that could fire laser beams as well as a deadly “electro-force.” The Robot also possesses powerful programs that provide him with extensive knowledge on a wide range of subjects, allowing him to undergo complex calculations, deduce facts and even operate the Jupiter 2 spaceship.

Despite his extreme powers, the Robot exhibits very loveable human traits such as the ability to discern, laugh, mock others, sing and play the guitar, thus making him the must-have toy in the 1960s.

The first B9 Lost in Space Toys were far from accurate. The first Lost in Space Robot toys, made by Remco in 1966, with a black torso and bright red legs and arms were quite hideous and expensive to boot. Still they sold rather well being the only ones available. And a strange fact is that an army of the little deformed Lost in Space Toys / bubble-headed boobies were actually painted gold and used in an episode of Lost in Space.

Lost in Space Toys : The Robot

And in 1998 with the Lost in Space movie reboot released, several companies produced models of not just the newer robot that was used in the movie, but the following toys based on the original TV robot.

- Franklin Mint : USA : 1998 : "Lost in Space B9" : Lost in Space Toys: The Robot is posed in a diorama against "space rocks". It has a glass bell jar that covers it and is mounted on a platform that looks like the J2. It speaks with a light that flashes in sync. It is probably the most accurate scale model ever produced.

For diehard fans with plenty of cash in pocket, replicas of the robot were at one time available commercially from a company called "B9 Creations" Now, Fred Barton Productions remains the sole supplier of life-size B9 Robots. The cost exceeds $20,000.

While B9 Creations built and shipped many robots to many happy customers, there were two prior companies, Classics Reborn and Icons, that promised life-size B9, took deposits and never delivered. This author came close to giving Icons a deposit on a robot.

Still, with about $10,000 and a couple of thousand hours to dedicate to building, hobbyists can build their own B9 as the members of the B9 Robot Builders Club have been doing for over 10 years. Offering parts, blue prints, and sage advice the B9 Robot Builders Club has helped many hobbiests with their grand robot building task. Excluding commercially built life-size replicas, more than 25 detailed, home-built replicas of the Robot have been built around the world. Building your own B9 doesn't get any better than this!