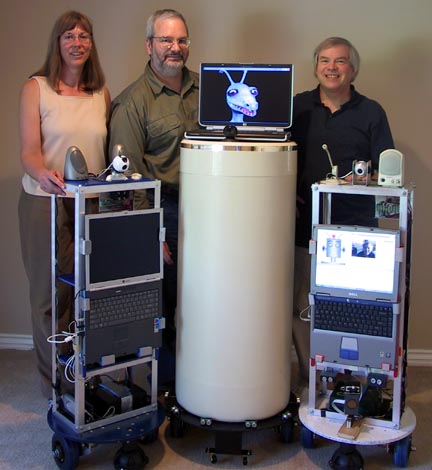 Many Leaf Robots Use a Kinect

Kinect Robot. Kinect is a "controller-free gaming and entertainment experience" developed by Microsoft especially for the Xbox 360 video game platform. The system employs a webcam-style add-on peripheral for the gaming console, which enables users to control and interact with the Xbox 360 without having to use a game controller. Instead, a natural user interface is utilized, along with the user’s body gestures and spoken commands. With the help of sensors, the software enables advanced gesture recognition, facial recognition and voice recognition, allowing gamers to literally transform their bodies into Xbox 360 controllers.

Requiring at least 190 MB of available storage space, the Kinect system software employs breakthrough techniques which can automatically identify users/ players. This exciting software was developed by Rare, a subsidiary of Microsoft Game Studios, and Israeli developer PrimeSense, whose range camera technology interprets 3D scene information from a continuously-projected infrared structured light. The Kinect sensor is a horizontal bar connected to a small base with a motorized tilt mechanism, designed to be positioned lengthwise above or below the video display. The sensor’s most important features are its “RGB camera, depth sensor and multi-array microphone running proprietary software,” which allow the software’s full-body 3D motion capture, facial recognition and voice recognition capabilities.

The sensing range of the depth sensor is adjustable, so the software can also automatically calibrate the sensor based on the player's environment, and accommodate for the presence of physical obstacles like furniture. Kinect is also reportedly able to simultaneously track up to six people at a time, including two active players for motion analysis as well as feature extraction of up to 20 joints per player. PrimarySense has said however that there is really no limit to the number of people the device can "see," as long as they are within the camera’s view.

Unquestionably, a Kinect Robot presents huge and highly exciting possibilities in the field of robotics, even if it was created specifically as an Xbox add-on. Since the software can be used in conjunction with basically any computer system, numerous developers have been researching possible applications of Kinect that go beyond the system's intended purpose of enhanced game play.

In fact, so many people have tried reverse engineering the Kinect software since it came out that Adafruit Industries decided to hold a competition highlighting the new creations. Héctor Martín, who produced a Linux driver that allows the use of both the RGB camera and depth sensitivity functions of the device, was declared the winner.

Other examples of people who have developed Kinect’s technology for a Kinect Robot include Philipp Robbel of MIT, who combined Kinect with the iRobot Create to map a room in 3D while allowing the robot respond to human gestures, and the Robot Locomotion Group at MIT, who have been using the drivers to develop a motion-controller user interface similar to the one envisioned in the film “Minority Report.”

The main feature of the Kinect is that it provides a 640x480 depth map in real time, which can basically indicate which objects are near and which are far in a given scene. This is highly valuable for use in obstacle avoidance and effective navigation in robots. One specific application based on this technology is RoboRealm, which provides computer vision, image analysis, and robotic vision systems through simplified vision programming. It utilizes a simple point and click interface using only an inexpensive USB webcam and any PC. Through Roborealm’s window-based application, robotic projects are able to gain “vision,” allowing it to track colored objects, navigate with obstacle avoidance, identify where it is, among others things.

But while the Kinect provides exciting developments in the field of robotics, it does have some limitations. The depth map is only valid for objects more than 2.5 feet away from the sensing device, for example. So if an object is closer than two feet, its depth will not be detected correctly. Also, because Kinect uses an IR projector with an IR camera (which is a form of stereo vision) it means that the sun’s presence will cause some issues with its functionality. A robot using the Kinect program will have a hard time functioning in sunny areas, although it can navigate perfectly without daylight. (The IR projector provides high resolution images in total darkness). A Kinect Robot would not be able to operate in sunlight.

Still, these setbacks are believed to be quite minor compared to what this super sensor has been able to and can still do. Microsoft’s Kinect has been dubbed the future of gaming, and may well even be the future of Windows, computers and yes, even robotics. As predicted by one enthusiastic reviewer, the biggest pull of Kinect is not what it does now, but what developers may be able to do with it in the future. Virtual reality, anyone?