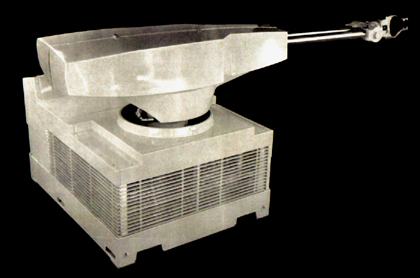 INDUSTRIAL ROBOTS ARE HERE TO HELP?

INDUSTRIAL ROBOTS: Friend or Foe? Man versus machine? The possibility of worldwide domination by evil cyborgs is still pretty far-fetched, but in workplaces around the world, this concept is no longer science fiction. Indeed, more and more machines are being trusted to do work previously done by humans. But the question of whether this is a positive or a negative development for us is largely a matter of looking at it. Surely they won’t be growing malicious minds of their own anytime soon, but the question is certainly relevant: Are industrial robots evil?

Between 1811 and 1812, a movement that protested the Industrial Revolution called the Luddites came out. It was a social movement composed of British textile artisans who banded together and destroyed mechanized looms as a form of protest against the changes brought about by the Industrial Revolution. The Luddites felt that the introduction of machines were taking away much needed work and changing their way of life, a sentiment that was magnified during the harsh economic climate of the Napoleonic Wars.

The Luddites were strongly opposed to “new, wide-framed automated looms operated by cheap, relatively unskilled labor,” resulting in the loss of jobs for many skilled textile workers. The Luddites came out in groups to burn and destroy mills and pieces of factory machinery, and for a time were so passionate in their anger that they were constantly clashing with the British Army. The British government suppressed the movement by conducting mass trials that resulted in many executions and penal transportations.

Apparently, the act of destroying new machines has had a long tradition even before the Luddites, mostly within the textile industry. Many industrial inventors of the 18th century were attacked by threatened human workers whenever they introduced new and more efficient ways of making yarn and cloth. In fact, an inventor named Samuel Crompton had to hide his new spinning mule in the roof of his house to prevent it from being destroyed by an angry mob.

Though the prospect of burning machines today seems a bit ludicrous, the term “Luddite” is still used to describe people opposed to “industrialization, automation, computerization or new technologies in general.” Seems hard to believe now, given how modern people are permanently attached to their i-Pods and Blackberrys. Does it follow then that the modern age has fully welcomed the help of machines?

At the beginning of all civilized societies, nearly all production and effort was the result of intensive human labor. When mechanical methods of performing functions were discovered and complex mechanisms were developed, the need for human labor was reduced. Repetitive functions such as lifting water and grinding grain were replaced, and other tasks slowly gave way to the more resilient strength of machines. Technological advances soon paved the way to even more complex machines and today, commercial and industrial robots are used universally and extensively, specifically in the fields of manufacturing, assembly and packing, transport, earth and space exploration, surgery, weaponry, laboratory research, and mass production of consumer and industrial goods. The simple and undeniable truth is that using robots is more practical than hiring humans: they can perform tasks with greater accuracy and reliability.

Industrial robots are hugely beneficial to industries that require tasks that are too dirty, dangerous, dull or difficult for humans. For example, a robot the size of a person can easily carry a load of over one hundred pounds and transport it quickly and repeatedly without error, everyday, 24/7, for years on end. Just imagine if a person was given this task. All a robot needs is to be programmed once and they can repeat this exact same task for years with absolutely no request for vacation leaves, sick leaves, and demands for higher wages or labor strikes. Robots are a little more expensive to acquire at the beginning yes, but in the long run, their creation is a dream come true for many corporations.

According to the Wikipedia, the first industrial robot was designed by George Devol, produced by Unimation, and finally created in 1956. These first industrial robots were called “programmable transfer machines” and used hydraulic actuators. They were accurate to within 1/10,000 of an inch. In 1969 Victor Scheinman at Stanford University invented the Stanford arm, an all-electric, 6-axis articulated robot which allowed it accurately to follow arbitrary paths in space.

Scheinman then designed a second arm for the MIT AI Lab, called the "MIT arm which was later upgraded and marketed it as the Programmable Universal Machine for Assembly (PUMA).

The late 1970s brought in GE and FANUC Robotics which brought robotics to assembly floors across the planet.

Truly a far cry from the Luddite’s philosophy, modern industrial robots have been called “true marvels of engineering.” More so in places like Japan, which faces a 16 percent slide in the size of its workforce by 2030 due to a shrinking population. As the number of their elderly continue to rise, their working population continues to diminish. And since they are unwilling to open their borders to large-scale immigration, Japan happily welcomes the development of robots that would fill the jobs of 3.5 million people and avert worker shortages. Furthermore, Japan believes that they don’t need to replace each person with a robot, and that robots could free up people to focus on more important things. The country also says they could save up to 2.1 trillion yen ($21 billion) of elderly insurance payments in 2025 by using robots instead of people to monitor the health of their aging population.

Other countries that have high unemployment rates, like America, are a lot warier, asking questions that hint of apprehension: Does technology complement or substitute human labor? Do robots in the workplace augment or replace? What jobs are secure from the onslaught of automation? While it’s true that jobs that don’t require a lot of thinking are in danger, it is also true that jobs that can’t be filled by machines open up as well. An example of this is when Netflix, the leader of online DVD rentals, introduced an online mail order service without late fees. Because many rental stores followed suit and online video stores started appearing everywhere, more programmers and software developers have then become a necessity, proving that while some jobs become obsolete, more intellectually demanding jobs are created.

It is believed that jobs involving the “transfer knowledge from one area to another, or thinking broadly, creatively and integratively, will never be in danger, because these tasks require powerful general intelligence, not just narrowly specialized intelligence.” Economists have proven as well that many machine tasks complement the more cognitive and creative tasks that humans still do, and give humans time to do those tasks, therefore increasing the humans’ productivity. This makes the human effort steadily more “valuable,” so the humans can produce more with machines’ help.