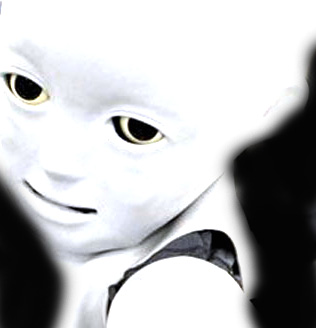 Future Robots. Considering the advances coming out in robotics every year, including robots that can change expressions using moveable ‘flesh,’ eyelids, eyes and lips, it is difficult to say whether the future will usher in a world made easier and more comfortable by intelligent, autonomous robots, or one that will ultimately be destroyed by them.

To get a basic idea of how advanced robots will be in the next few decades, one could look at how far videogames have come since 1973. Back then, the most exciting videogame was Pong, in which a white dot acting as a tennis ball moved back and forth across a black screen, manipulated by players who moved the “rackets” up and down by means of a joystick. Today, several games have the ability to figure out a human player’s strategy and so adjust its settings to work around it, like Starcraft and the Earth Trilogy, not to mention having graphics that have far, far surpassed the plain, white bars of Pong.

Even now, scientists have already developed the components for more advanced sociable future robots, such as emotional recognition and expression systems—vital if the goal is to make robots as human-like as possible. In the military, researchers are predicting that autonomous, combat-ready robots can be deployed in as early as 5 years. In research facilities, walking humanoid robots like ASIMO continue to be improved, while the creators of Osaka University’s Child-robot with Biomimetic Body, or “CB2,” say the child robot can now develop social skills by interacting and watching human facial expressions, albeit slowly. The four-foot, four-inch humanoid is designed to learn just like a human baby: In two years, the goal is for the kidbot to be speaking in basic sentences, matching the intelligence of a two-year-old human child.

Given the exponential quality that technology is capable of, no one can say for sure if and when the line between human and robots will be blurred completely. Rapid advancements in computer technology and over 50 years of research into AI programming has brought the reality of genuinely thinking machines closer. Already we have robotic platforms that mimic human thought, understand speech, play table tennis and beat human chess players. These are feats that just a few decades ago were deemed impossible and in future robots, they may become much more.

In a famous quote, American scientist and economist Herbert Simon said, “It is not my aim to surprise or shock you—but the simplest way I can summarize is to say that there are now in the world machines that can think, that can learn and that can create. Moreover, their ability to do these things is going to increase rapidly until—in a visible future—the range of problems they can handle will be coextensive with the range to which the human mind has been applied.” Certainly, the possibility of future robots even more intelligent than humans seems just as imminent.

The premise of intelligent future robots rising up against their human masters has long been utilized by many writers and artists, ever since Karel Èapek first introduced the concept in his 1921 play, R.U.R. (Rossum's Universal Robots). This is an outstanding fear of many, not helped by Hollywood depictions of evil cyborgs such as terminators and intelligent machines bent on destroying the human race. But in his play Èapek also suggests that robots are helpers made specifically to eliminate the drudgery in human lives: to perform tasks that are too dull or dangerous to do. The term ‘robot’ after all, was coined from the Czech word for ‘slave labor.’

Industrial, medical and household robots have certainly changed the way humans live. Factories, hospitals and homes have benefited enormously, and though far from the anthropomorphic laborers envisioned by Èapek, these robots do get their jobs done very efficiently—far better I daresay than their human counterparts can.

They are less exciting than intelligent androids for sure, but these practical, efficient robots are the ‘bots I would like to see more of in the future. I would like robot companions that can assist the elderly and disabled, robots in hospitals even more advanced than the da Vinci Surgical System, educational robots that can revolutionize learning in schools, and most importantly, robots that are more affordable and readily available to everyone. If it is true that millions of robots will be employed throughout the world in the coming years, then the law of economics would certainly have to play its part.

I am a big science fiction fan, and I have to admit the entire idea of a future where humans and robots coexist is exhilarating. Whether this future of robotics is headed towards harmony like the Jetsons or a more dark future as depicted in the Terminator movies, I can’t say. The military would have us think the latter true. For now though, I continue to be hopeful rather than fearful of Man’s future robotic achievements.

See the Wikipedia for More Info