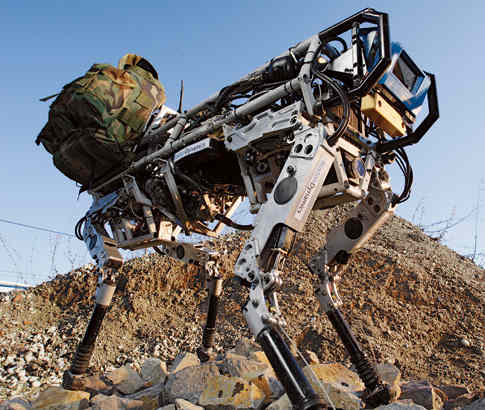 BIG DOG ROBOT. I would think that everyone who’s seen the video of the giant, lumbering mechanical dog on Youtube has been more than a little spooked. Here is a large, robust machine built for war, and there are no human lives on board. How futuristic is that? It moves uncannily like a real animal too, powered by a hydraulic, actuation system that uses fluids and pressure to mechanize its legs. Standing more than 3 feet tall and weighing about 240 lbs, the headless dog ambles along, looking like it means business. And with the way its progress is going, it's really only a matter of time before the Big Dog robot, or the LS3 (Legged Squad Support System), steps out on the battlefield.

Considered the alpha male of all the Boston Dynamics robots, the Big Dog is a rough-terrain robot that walks, runs, climbs and carries heavy loads for its human masters. With four legs articulated like a real animal’s, the machine is equipped with features that absorb impact and recycle kinetic energy from one step to the next. This mechanism allows the BigDog to walk across virtually any type of terrain, while carrying loads of up to 340 lbs.

In tests, the BigDog is shown an ability to run at 4 mph, climb slopes angled up to 35 degrees, walk and climb across rubble, mud, snow and water. It has also set a world's record for legged vehicles, able to travel 12.8 miles without needing to stop or refuel. This is all controlled by BigDog's on-board computer, which handles its locomotion and the small servo motors that moves the robot’s legs.

This control system also navigates, provides the machine’s balance, and adapts according to conditions. The control system is equipped with a variety of sensors, including sensors for locomotion that include joint position, joint force, ground contact, ground load, a gyroscope, LIDAR and a stereo vision system. These basically tell the device where its joints are and what they are doing, such as whether the machine is in contact with the ground or not. Other sensors concentrate on the BigDog’s internal state, keeping its inner devices (hydraulic pressure, oil temperature, engine functions, battery charge, etc.) in check. BigDog's heightened sense can also survey its surroundings and recognize potential danger.

Apart from its fortitude, the Big Dog is extremely smart. Its programmed behaviors are some of the most advanced artificial intelligence and navigation systems ever developed. Big Dog can run or walk slowly along soldiers, lay down to be loaded or unloaded, and be aware of its surroundings the entire time. Only a direct and crucial hit can take the BigDog off its path, though it will never fall to the ground, no matter how hard it’s hit. This is due to its built-in laser gyroscope, which keeps BigDog on his metal paws, even when it slips, stumbles or is kicked over.

These dogs are not ready yet for actual battlefield action; its autonomy needs further improvement. Still, the US Army has high hopes for these bots. It is presently most effective way to carry all kinds of material, over any kind of terrain, reducing the weight that soldiers have on their bodies and freeing them to move faster and more efficiently. Just like pack mules, these robots spare the need to have to build roads over rugged landscapes. Robert Mandelbaum, a program manager in DARPA's Information Processing Techniques and Tactical Technology offices, says that “Some of the wars that we're engaged in now happen to have that kind of terrain."

The BigDog is created by Boston Dynamics, an engineering and robotics company “dedicated to the way things move.” Known for building highly advanced robots with remarkable behavior that utilizes mobility, agility, dexterity and speed, the company has already developed hopping and self-balancing robots that move like animals. The corporation is founded by former MIT Professor Dr. Marc Raibert, and is comprised of world-class development teams that take projects from initial concept to prototyping, to build-test-build engineering, to field testing and low-rate production. Some of its biggest clients include DARPA, the US Army, Navy and Marine Corps to Sony Corporation.

Building the complete robot accordingly takes 30 months, at the cost $32 million. It is expected to debut in 2012. That means these legged robots will soon be fighting alongside humans, even replacing them entirely, a scenario long imagined by science fiction fans, from Terminator to the creators of Metal Gear. Now whether this is something to be thrilled or apprehensive about I can’t entirely say. All I know is they’re pretty cool to watch in action.

Got an unusual robot photo to share? If it's WEIRD enough, we'll post it and credit YOU.