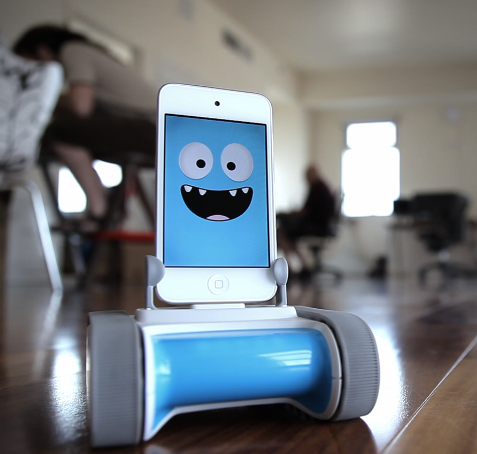 Meet Romo the smart phone robot. As you may have heard, the typical smart phone of today has tons more computing power than the Apollo module that landed on the moon. So it should hardly come as a surprise that a smart phone can be used as the brain of a miniature robot tank.

Peter Seid and Phu Nguyen are the engineers behind Romo, a simple and inexpensive robot kit that can turn a smart phone into a highly functional and mobile droid. The Romo kit will include a motorized platform that looks like a transparent cart which rolls along using tank-like treads. This acrylic platform is provided with an accessory port for your smart phone.

The kit also includes a rechargeable battery, a charging cable, and analog circuitry that is used to drive the motorized platform. The circuitry is tuned to specific frequencies that, when emitted, serve to activate the motors. Any smart phone that can play the correct frequencies can be used to control the motorized Romo bot. The smart phone also handles the software apps that are used to program and control the little robot.

There are three software apps that will come packaged with the Romo kit. The first is the RomoRemote, which allows you to control the smart phone powered robot from a distance using a second smart phone via Wi-Fi connection.

The RomoRemote app has a variety of possible functions, but Seid and Nguyen emphasize the ability to turn the Romo droid into a spy robot. Using RomoRemote, you can control where the robot goes and see whatever its phone camera is pointed at.

The second software app is the enjoyable Romo Kart. Clearly inspired by the legendary Mario Kart game, Romo Kart allows you to play robot racing with your friends. Besides driving your “kart,” you can launch digital “bomb” attacks that send opposing racers into uncontrolled spins. You can also deflect bombs, reverse your opponent's controls, or disable their power systems, making Romo Kart an exciting and unpredictable challenge.

The third app is the Drag and Drop Programming Module, which offers you a simple and intuitive means of programming Romo on your smart phone. Just drag and drop your programming commands and you'll see the Romo execute them. It is that easy to become a robot programmer!

Seid and Nguyen raised funds for the Romo project through Kickstarter.com. They were able to raise over $114,000 last year. Special limited edition Romo kits were released in time for December 2011.

Alas, since this article was written time has passed and this robot company and its robot are no longer around. Still, it was a great idea! and below is a link to Instructables that shows how you can build your own!

Turn Your Phone into a Robot!