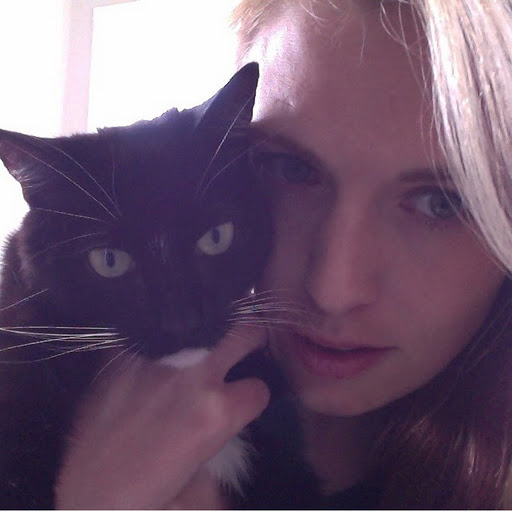 The robot clone annidroid's model Annika Skywalker and her cat.

A robot clone? Welcome to the Annidroid project! We are attempting to turn an old Wowwee Alive Elvis robot into a robot clone of Annika Skywalker, the president of the LA Robotics Club!

In the photo above, you see our model, the beautiful, brilliant and brave (Her face was completely covered in goop for nearly an hour as her face was cast.) Annika Skywalker, head of the LA Robotics club. Our first attempt at mask making was a bit of a flop. The mask was too thin in most places and too thick in others. (See photo below.) I really need to take a class in mask making. Sigh. The face casting was done by a friend of ours out in Hollywood--well, Burbank anyway.

I am using the EZ-Robot board and software for this robot clone project.

I pulled out ALL of the Elvis servo driver (multiplexed H-bridges) boards, as well as the multiplexed ADC boards. I also took out the Elvis CPU and all other Elvis boards. Annidroid the robot clone does not need these.

I then took eight Hitec HT 311 servos ($10 each) and unsoldered the motor lugs from the board and then hooked up one board to each Elvis motor/trim pot sensor pair. I extended the servo wires and tested each motor for direction and limits with my servo tester. Each worked FINE!

I hot glued the split Elvis lip back together so that when Annidroid lifts her upper lip, she will give more of a grimace rather than an Elvis lip twitch.

I then connected all eight servos to my EZ-Robot board and tested them with the EZ-Builder's new Personality Builder script that allows for random movements. I connected the EZ-B's bluetooth and turned it all on and BAM! The Robot Clone Annidroid project took a big "step forward!" EVERYTHING WORKED!!!! 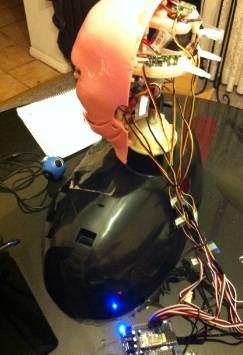 The fact is that for the last two years I have, with the aid of a couple of friends and hundreds of hours of work, reverse engineered the Elvis boards. And even after all that time, controlling the Elvis remained difficult and time consuming at best. Finding the EZ-B microcontroller was the best thing that has happened to me since the MS Kinect sensor. Annidroid will utilize both of these.

I took out the bracket and took the time to bend it to the right angles on my metal "brake." I then screwed it down with four machine screws. I attached the servo horn with just a ring of wire. I know that this will have to be replace sometime as this will cut through the metal horn in time. Annidroid will need some repair sooner or later. Sigh.

I Decided to simplify the neck tilt mechanism. I first pulled out most of the original head tilting electronics. I then removed the original Elvis push rod motor and half of its plastic push rod as well.

I finally replace it with a Hitec HT805MG giant scale servo (350 oz in or so). The hardest part was attaching the servo to the Elvis base. I used a strip of metal salvaged from my VEX robot kit. It seemed to work just fine. I got lazy and didn't bend it tightly enough around the servo. Will need to go back and bend it so it is snug and then add a bit of metal to hold the servo tightly to the bracket.

I tested it with a servo tester and IT Worked! The Robot Clone Annidroid is certainly coming along. 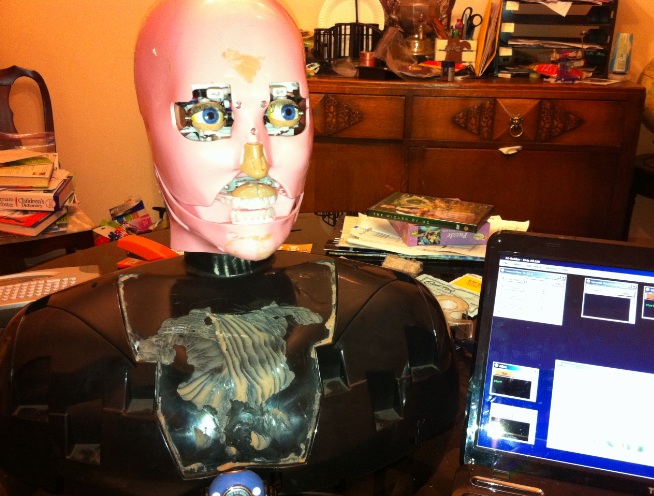 By the way, this was all done on a secondary Elvis bust base. I will finalize it in the original base in the future.

Once I get this working I will then go back to mask casting. OR perhaps find someone who knows what he or she is doing.

Started working on getting the neck tilt mechanism working. For each of the two tilting mechanisms, the original Elvis robot used a DC motor turning a worm gear. As feedback sensors, it had an emitter / detector pair for each motor and a series of 4 limit switches.

I then thought long and hard about programming such devices: let's see, switches, emitters, detectors, h-bridges...Aw hell! A servo or two could do all that!