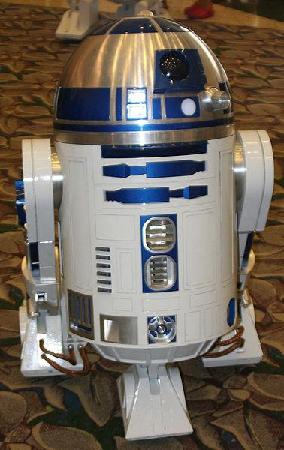 R2D2 is one of the most recognizable fictional characters in the world.

He played an important part in the first Star Wars film and would go on to appear in every episode of George Lucas's space adventure saga.

Commonly referred to by the nickname "Artoo," the plucky little droid won the hearts of fans with his adventurous spirit, resourcefulness, and loyalty to his friends, all of which he displayed without speaking one meaningful word.

He is almost always accompanied by his faithful companion, the golden droid C-3PO (or Threepio), who is frequently exasperated by Artoo's behavior.

George Lucas, the creator of R2 and C-3PO, said he took his inspiration for the droid characters from a 1958 Japanese film by Akira Kurosawa, The Hidden Fortress. The Kurosawa film is told from the point of view from a pair of peasants, who also provide the film's comic relief.

Audiences first encountered R2D2 in the 1977 film Star Wars Episode IV: A New Hope, where the droid was given a recorded holographic message to deliver to Obi-Wan Kenobi. Artoo and Threepio landed on the planet Tatooine, where they were bought by the uncle of Luke Skywalker. Artoo eventually found a way to get to Obi-Wan Kenobi and deliver his message, which showed Princess Leia imploring him to come to her aid. This led Obi-Wan, Luke, and the droids to recruit Han Solo and Chewbacca on a mission to rescue the Princess from Darth Vader and then to destroy the Death Star.

Besides delivering the message, the droid proved his mettle in various ways, such as tapping into the security network aboard the Death Star and assisting Luke in piloting his X-Wing space fighter.

The original Star Wars movie established the familiar personality of R2, which was to go unchanged throughout all six films in the franchise.

The droid is shown as being highly courageous, unwavering in loyalty, and a little bit stubborn. He never backs down from a mission, even when the odds appear to be stacked against him. His personality is often contrasted against that of Threepio, who is fussy and timid.

Unlike Threepio, Artoo is the heroic type, and he saves the day at least once in each movie.

According to George Lucas, each movie is intentionally structured to have one or more 'Artoo as hero' scenes. Artoo never speaks an understandable word in the entire film series, communicating only by means of beeps, clicks, and other electronic noises, and yet manages to be one of the most appealing heroes of the franchise.

The character is so engaging that some of the Star Wars actors, including Ewan McGregor, have spoken of feeling a great deal of affection for him.

The popularity of R2D2 led to the character appearing in a wide range of Star Wars related merchandise and media, including commercials, comic books, and video games. Artoo and Threepio even starred in their own animated children's show, Star Wars: Droids, whose episodes aired in the United States from September 7, 1985 to June 7, 1986.

Artoo also shows up in the 2008 animated film Star Wars: The Clone Wars, as well as the animated Clone Wars television series that premiered on the Cartoon Network in October 3, 2008 and is now in its fourth season.

In the first three Star Wars movies, R2D2 was portrayed using two distinct builds. One was a remote controlled model that moved using three wheeled legs. The other was a mockup that was worn by British actor Kenny Baker, who would walk with it using two legs.

The noises made by Artoo were provided by sound effects engineer Ben Burtt, who played a ARP 2600 analog synthesizer for some of the sound effects and used his own voice after processing to create the rest of the sounds.

By the year 2000, when the Star Wars production crew was filming principal photography on Episode II: Attack of the Clones, there were a total of 15 R2D2 builds being used on the set. These included eight radio-controlled models, two mockups that were worn by Baker, and five stunt models that manipulated using either puppet strings or wires.

The technology to build a real R2D2 is not yet available.

Artoo clearly displays a level of intelligence, autonomy, and emotion that are currently beyond the capabilities of even the most advanced robots of today. However, Artoo has inspired a number of people to attempt to build their own loyal companion made out of circuitry and machine parts. The results have been limited but inspiring.

Try searching for "voice activated R2D2" on YouTube to view one of the more amusing examples. The voice activated Artoo can understand over 40 vocal commands, including "Go forward," "Turn around," "Light beam," and "Play message."

The R2D2 replica is also equipped with infrared sensors and motion detectors that enable it to find people in a room.