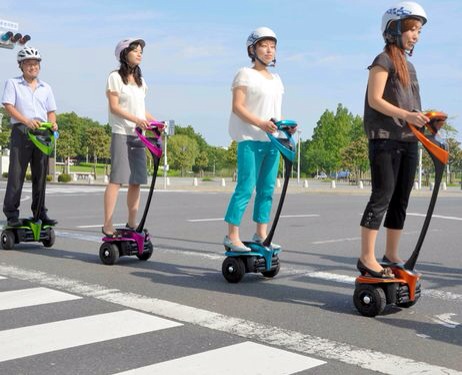 Personal transport assistance robots were recently showcased at the 42nd Annual Tokyo Motor Show, which featured not only cars, but also these these personal mobility devices alongside.

The Toyota Winglet is being marketed as a vertically aligned mechanized scooter, but its self-balancing gyroscopic navigation system is clearly reminiscent of Dean Kamen's infamous Segway personal transporter.

The Segway was heralded as a revolutionary technology that would change the way we commute and even transform the design of urban landscapes. Kamen's transportation device was indeed a remarkable technological achievement, and it led to the creation of a new market for personal mobility devices.

But the design and lifestyle revolution that Kamen envisioned has not yet come to pass. With Toyota Motors following in Kamen's footsteps, however, we may yet see a day when personal transport assistance robots become as mainstream as bicycles.

Toyota's device is known as the Winglet to reflect its fleet and agile form. It is more delicate and slender framed than the Segway, so it is probably not as rugged or sturdy. It is also slower. While the Segway can reach a speed of 12.5 mph (about 20 kph), the Winglet is only capable of going as fast as 3.7 mph (about 6 kph).

The Toyota Winglet is probably not an ideal device for urban commuting, especially at rush hour, but it can be useful for getting around in a shopping mall or airport. In fact, Toyota has been testing the use of three different Winglet models at a number of Japanese airports, including Central Japan International Airport (Centrair) near Nagoya. The devices are also being tested at Laguna Gamagori, a seaside resort complex.

The Toyota i-REAL looks a bit like a motorized wheelchair from the digital world of Tron. It is an electrically powered three-wheeled vehicle that can reach speeds of up to 18.6 mph, or 30 kph. In its low speed mode, the i-REAL seats you in a relatively upright position, from which you are able to interact with other people as well as your surroundings.

The Toyota i-REAL is designed to offer an environmentally friendly, energy efficient, and pollution free means of transporting a single person around an urban landscape.

Toyota envisions that the popular use of personal transport assistance robots, such as the i-REAL, will help cities to reduce traffic gridlock and lower the demand for parking lots and structures. If that happens, then one day we may look back at the 42nd Annual Tokyo Motor Show and remember when we first encountered the Toyota Winglet and i-REAL devices.