The Honda ASIMO... Is 'More Than Humanoid' 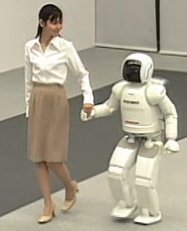 Honda Asimo is a familiar face. You, yourself may already be familiar with ASIMO, the humanoid robot that has starred in several Honda commercials. Recently the Japanese automaker unveiled a new and improved version of ASIMO that is eerily autonomous.

The all-new ASIMO (short for "Advanced Step in Innovate Mobility") demonstrates an uncanny ability to move and make decisions independently, without direct input from human operators.

ASIMO packs enough computing power to speedily process information about its surroundings, which it can then use to determine its successive actions. It is programmed with behavior recognition software that, combined with its advanced set of built-in video and audio sensors, allows it to predict human actions, interpret people's postures or gestures, and recognize faces and voices. According to Honda, these functions will help the artificial humanoid to be more easily integrated into society, where it will be able to peacefully coexist and interact with ordinary people.

The newest version of ASIMO stands at 4′ 3” (1.3m) in height. It demonstrates impressive capabilities of movement and dexterity. The current model is able to run forwards at speeds of up to 5.59 mph (9 kph). It is also able to run backwards, jump up and down, and hop on a single foot. Its hands are flexible enough to make sign language gestures.

Using its tactile and visual sensors, the honda robot is capable of recognizing objects and handling them with the correct amount of force and dexterity. The robot can perform tasks such as removing caps off bottle tops and pouring water into paper cups without crumpling them.

From the moment of its initial appearance in 2000, the robot has always been intended to operate within a human environment. Only a robot that is adapted to function in the human world can be expected to successfully assist people in real-life situations.

With each new iteration, Honda has presented a gradual increase in the ability of humanoid machines to act more humanlike. In December 2006, the ASIMO was still having trouble climbing stairs. But only a month later, the robot was showcasing skills such as walking up and down stairs, running, and kicking a football.

Now the robot is not only skilled at locomotion, but adept in the use of its hands. We may soon see the day when the robot is capable of learning

and applying them in real-world situations. The Honda ASIMO Humanoid could well become the first humanoid to gain acceptance in human society.