EZ Robot review update: A new and VERY COOL feature has been added to EZ-Robot's EZ-Builder software: an A.I. chatbot! Yup, your robot can now chitchat all day with anyone asking questions, answering questions and almost sounding like a human being!

EZ-Robot is using a connection to Pandorabots.com to allow users to create their own A.I. entity.

The EZ Robot Review
a Product Review of the EZ-Robot Board : the EZ-B

Thomas here, founder of this ‘zine, founder of the Riverside Robotics Society, and general robot nut. As a lot of you may have guessed, I like robots A LOT. And as such I am constantly buying and trying new items in the robotics field. From software to hardware I probably try over 50 new products a year and just a few weeks back I saw something that really caught my eye—the EZ-Robot microcontroller board.

It was a Thursday evening and I was just reading my emails from the many online clubs that I belong to and there it was on the B9 Builders Yahoo group, a few words about something called the EZ-Robot building kit. Now with my lack of spare time and my grand interest (insane interest?) in robotics they had my attention. I briefly looked at the EZ site (www.ez-robot.com) and reading over the specs. I was impressed. I read that the EZ sytem offered speech recognition, TTS (text-to-speech), vision color/face/motion camera tracking, servo control, DC motor control, ADC, glyph recognition, joystick/Wii remote support, HTTP server support, mobile device, visual and coded scripting/programming, object avoidance, and "hundreds of more features" and well, I couldn't resist. It was nearly everything I had been wanting and not quite yet succeeding in adding to my life-size Robot Betty9 project. So, after viewing a youtube video or two (there are scores of demonstrative and instructional videos on the EZ site) I decided I would bite.


I quickly found their order page and saw that for a mere $235 USD (it's a Canadian company) plus shipping, I could get the whole enchilada. WAIT! $235? What did they think they were selling, a VEX kit? Complete BOEbots were only $200. I looked a little closer and “The Complete Robot Kit” as it was called didn’t even come with gears or a building platform. What it did come with? It came with an EZ-B v3 Bluetooth Robot Controller, EZ-Builder Robot Control Software & SDK, Vision Tracking Camera, HC-SR04 Ultrasonic Distance Sensor, 5 x Servos (3 standard, 2 Continuous), 2 x Peripheral Cables, 6 x AA Battery Holder & Adapter, and Servo Attachments and Wheels.

Well, I had all of those items—except for the EZ-Robot board and its software. So I looked a little further down EZ-Robot’s home page and found the a la carte pricing. EZ-Robot's EZ-B board alone was going to be $136.50. (Nearly 150 bucks with shipping.) I thought, well, even if it doesn’t do much, I’ll get an article or two out of it. So I located the “Add to cart” button (is that what a la carte really means?) and gave it a big firm CLICK, and 10 minutes later I was 150 bucks poorer and was owed one EZ-B, an EZ-B robot board! 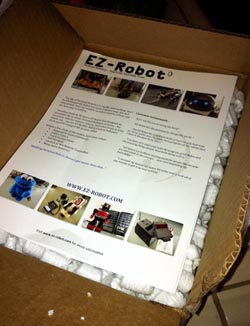 About a week later my EZ-Robot EZ-B board arrived. I was THRILLED! I quickly opened the box and in the deep recesses of the styro-popcorn, I pulled out two items packed neatly in a ziplock which had a "Made in Canada" sticker prominently stuck to it: an EZ-B robot board and a battery pack. Nothing more. I looked again. Ah, yes! A slip of paper pointing me to the EZ-Robot web site and the downloadable EZ-Robot manual!

I plugged in the ole laptop, connected to my wifi and in 5 minutes had downloaded the manual. SUCCESS! Instant robotics was now MINE!
EZ Robot Review
I opened the PDF manual as soon as its precious little bits arrived on my laptop's desktop. Within the first two minutes I made an interesting discovery that I should have long ago found on the EZ-Robot.com site. The EZ-B robot board was designed to be used in tandem with a PC. But not just any PC, it required one running Microsoft's Windows 7. 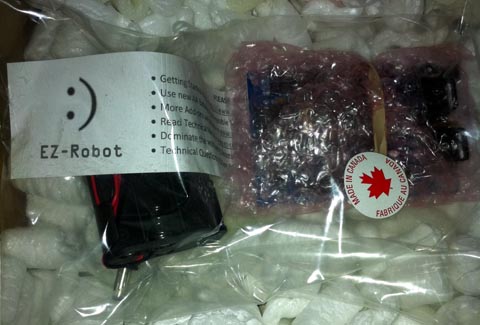 Luckily I had upgraded my PC a few months ago. No problem there. (Later I found that my alternate Windows 7 PC, a tiny underpowered netbook could not run the software without endless problems. The EZ-Robot system with its voice I/O and its camera software needs a BEEFY computer. Wimpy netbooks will just not work well if at all.) 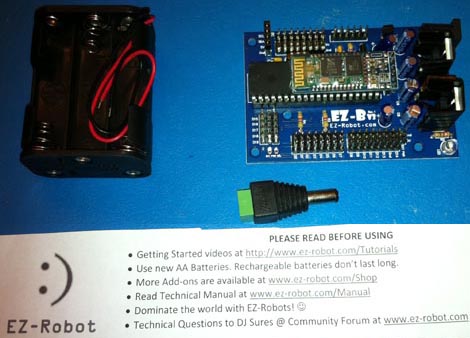 I plugged a servo into the EZ-B’s servo port 0, added batteries to the power supply, plugged it into the EZ-B and with a BRIGHT BLUE FLASH from its tiny blue LED, my EZ-B WAS ALIVE! I was SO EXCITED!) The blue LED then began to flash on and off like a tiny blue fembot eye winking at me. I winked back. 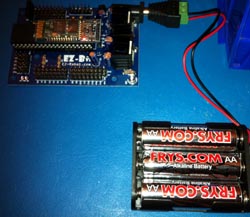 I next downloaded the EZ-Builder Robot Control Software & SDK, powered up the EZ-B, lauched EZ-Builder, added and attempted to run a simple servo control. I clicked the “connect” button so that the bluetooth board would connect to my PC. NOTHING. NOTHING happened at all. The bright blue LED continued to flash, but that was all. I checked again with the instructions. The instructions said I had to make sure that I had “paired” my Bluetooth transceiver with the EZ-B’s. Ah, the pairing. I vaguely remembered that that was part of Bluetooth connections. The problem I then realized was that my PC didn’t come with Bluetooth hardware. No big deal, I searched around my cavernous garage and located a long unused Bluetooth dongle.

I plugged it in, loaded the drivers, paired it up with the PC, restarted the visual EZ-Builder Robot Control Software, and attempted to connect again to the EZ-B—and SUCCESS? Not quite. Still nothing worked. Hmmm…problems, problems—what to do? “When all else fails, read the manual!” OK, back to the manual. Ah, I found that I was REQUIRED to connect to the lower number of the two com ports offered in the connection component. The secondary com port, the manual said, was reserved for a future feature. (Couldn’t hardly wait—sigh!)

So, I selected the LOWER NUMBERED com port, clicked the Connect button and the blue LED stopped flashing! I was on my WAY? Not quite. I learned that I needed new firmware. NEW FIRMWARE? Why couldn’t the gods at EZ-Robot.com just update the little bugger BEFORE shipping it out to me? Ah well, such is modern technology. I then updated the firmware and after a short 3 minutes it was done. IT WAS TIME! No, it was NOT time. Sigh. I re-started EZ-Builder and nothing. I pulled the power from the EZ-B, restarted EZ-Builder a second time, selected a com port, connected, selected a servo control, and tried moving the servo. EZ Robot Review

Nothing. Back to the manual. I looked for instructions for connecting and running a servo from the EZ-Builder. There was NOTHING on it. NOTHING AT ALL. It seems that the people at EZ-Robot.com didn’t put much into the textual manual, but rather put all the info on a large number of youtube videos. There it was, the information I needed for connecting a servo—on a video. Sigh. (One thing the folks at EZ-Robot.com need to do someday is hire a writer to gather all the data in all the videos and put it all down in a single complete manual for people like me.) EZ Robot Review
So, after spending a few minutes sifting through the video on servos, I found that I needed to click the Config button and configure the software to point to the port that I had plugged the servo into, port 0. Fifteen seconds later:

Really! It worked! The servo moved! It turned left! It turned right! I was so happy I could just shout… 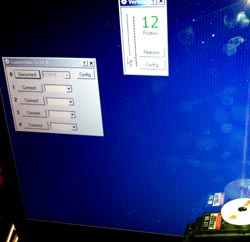 
I deleted that one and then added a new speech control with the following verbal commands tied to moving a servo:


And one more tied to a text-to-speech response:

One hitch was that I forgot exactly what I had typed and had to open the speech recognition control to see what words I needed to say.

You might notice that I put the word "robot" at the beginning of each command. I learned many years ago that when commanding a computer it's best to limit what it responds to by prefacing the command with the robot's name. In my case, I am calling the robot, "robot."
EZ Robot Review
Finally I added a camera control to try color, motion, and face detection. I opened a video control window, select my own camera, selected face detection and watched as the software drew little boxes around my face even as I moved around. I then tried motion detection which also worked well. I finally switched over to color detection, picked up a strawberry from the plate of snacks that my wife had earlier given me and had the software identifying the color red as I moved the strawberry around in front of the camera. WOW!

Lastly I configured the camera control to track my face with a servo. (Believe it or not, it's all built-in.) A few clicks and zip! Zip! Zip! The servo was tracking my face! I would move to the left of the screen and the servo would "turn to face me." I would then move to the right and again, the servo would follow. It worked "right out of the box!" AMAZING, simply AMAZING!
EZ Robot Review
Configuring the EZ-B was easy. It was really easy.

This product, this system, the EZ-Robot system was proving to be a system that took mostly all the robotics features that hobbyists were attempting to add to robots and then dumped them all into one box, one program, one easy to use system. Once I got past the few pitfalls of the product. WOW! I had not had this much working robot action in YEARS of C and LISP programming. Even my six year old daughter was able to setup and configure the software.

Its now been about two months since my EZ-B robot microcontroller arrived. I've successfully put together a lot of EZ-Builder projects. And I'm using it as the core system for my AnnaDroid humanoid robot project.


EZ Robot Review
I've decided that DJ Sures and the EZ-Robot team has done a FANTASTIC JOB on this board and with promises of endless free upgrades and improvements (DJ, if you are reading this, PLEASE ADD KINECT SUPPORT!) and perfect product support, this robotics board, software, and kit, the E-Z Robot system is the best on the market and I am recommending it to all my fellow robot nuts. This concludes my EZ Robot review.

Coming soon: an interview with the brain behind the board, DJ Sures!