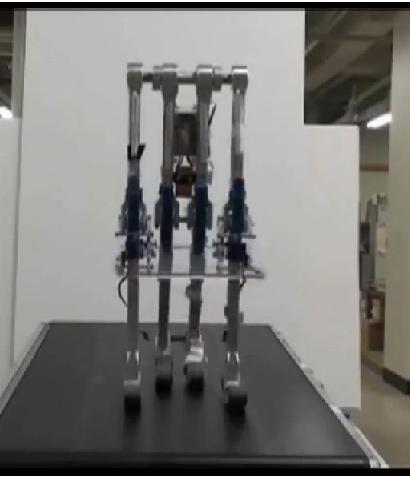 BlueBiped is a remarkable piece of technology - a set of robotic legs that can walk for miles without a power source. Or human guidance. You need only place this robot on the ground, give it a starting push, and it will walk without stopping as long as it remains on a downward slope with no obstacles to block its path.

This amazing machine is the brainchild of researchers at the Nagoya Institute of Technology in Japan. The robot's developers crafted the machine in imitation of the human body, with recognizable thighs and lower legs that are sized at human lengths and proportions — just made out of aluminum instead of flesh and bone.

The device also has ankles and knee joints to allow articulation, but no motors, no hydraulics, no sensors, and no computers. It walks using nothing more than the power of gravity.

The developers applied the “principle of falling” in their design of BlueBiped's mechanism for walking. The principle is based on the idea that the human movement of walking is accomplished by "falling forward" in increments.

The robot is weighted so that it is constantly tipped forward, offering it a small but significant amount of momentum, just enough to enable forward movement.

Each step forward is a slight fall that provides enough momentum to cause another fall, again and again, creating the process of walking.

Last year, the robot set a Guinness world record after it walked nonstop for a distance of 15 km (9.32 miles), the longest distance that has ever been walked by a bipedal robot. The epic walk took a total of 13 continuous hours to complete, with the robot completing 100,000 consecutive steps without human intervention. It was a singular achievement.

Now the Nagoya Institute of Technology team is planning to develop a commercial version of the robot, with the support of System Instruments, a technology company.

But what need would anyone have for a zero-energy use robot that can walk only downhill? The developers have several real-world applications in mind. The robot can be modified to fit on a person like an exoskeleton, to enable people who have difficulty walking to cover long distances on foot. A similar function could be provided by a Segway-like personal mobility device, but this robot offers the advantage of not requiring any power source. It remains to be seen whether the BlueBiped can be developed into a viable commercial product.