B9 Replicas - The Lost in Space Robot 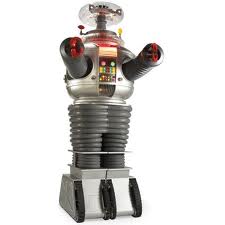 B9 Replicas - The Lost in Space Robot. Every boy who’s followed the Lost in Space series must have, at one time or another, coveted that extremely strong yet endearingly human-like Model B9 robot on the Jupiter 2 spaceship. Every boy wanted to be Will Robinson, if only to have a personal, barrel-shaped contraption that could warn them of impending danger.

The robot, a General Utility Non-Theorizing Environmental Control Robot, with no actual given name(please don't call him "Robby the Robot"), debuted on one of television’s most beloved series of all time on September 15, 1965. Endowed with superhuman strength and a range of futuristic weaponry, the robot could execute difficult tasks and fight off villains when necessary. He had claws that could fire laser beams, as well as an ‘electro-force,’ and powerful programs that gave him knowledge on an extensive range of subjects. He could calculate, construe facts and operate the spaceship. He could also sing and play the guitar.

He was every boy’s dream companion, and so when these boys became men, there was only one logical thing for them to do: make their own B9 robots.

And indeed, hundreds people from different states and countries like Australia, England, Canada and Japan have, or at least are trying to build B9 replicas. These B9 robot buffs pay a $28 fee every year for membership in the B9 Robot Builders Club, allowing them to obtain robot parts on discounts, and much needed advice from fellow members. Both are useful, as the B9 bubble head can cost more than $300, while the blinking brain inside can total up to $1,500. But the tips from other members are perhaps the most valuable, as the B9 robot is a very complex toy to make.

Retired Air Force pilot and now software writer and robot builder Mike Joyce, who runs the B9 replicas site from South Dakota says, referring to their members, "You have all levels. You have people building everything themselves, scratch building parts from common household items. They can build a respectable-looking replica for a couple of thousand dollars. Then you've got people like me who've animated them and put in computers and motors, and sunk $15,000 to $20,000 into these machines. As a hobby, of course, but you get a little obsessed with it after a while." Like many of the B9 members, he was one of the boys who dreamed of owning a B9 robot as a child. Today, most B9 builders are usually men in their 40s and 50s, who like computers, electronics and science fiction.

Building one’s own robot can indeed get pretty pricey: individual parts for just the head alone range from$200 to $1500, but the club allows you to purchase parts from either known robot builders like Fred Barton, or other members, and the prices vary. Barton, who calls himself “the first name in movie robots,” is one of the club’s official vendors. He sells everything from parts to full-scale Robby Robots from Forbidden Planet. He’s started building the B9 since the early 1990 and says he was “the first to have the accurate, computerized, remote-controlled Lost in Space robot."

People heard about his B9 replica creations and began contacting him for advice or parts, and eventually these robot fans turned into the B9 Robot Builders Club. “I never thought it would be as big as it is,” Barton says. “There must be a couple hundred of these Lost in Space robots running around the country in various stages of completion and quality.” One of them, Dan Livingston, has put up his own website, (http://www.b9robotresource.com/b9_brain.htm) as a resource site for building the B9 and other machines. His own life-size replica moves, lights up and recites correct dialogue from the show. He installed motors, electronics and a car stereo with MP3 files to accomplish all these, taking him 4 years and costing him about $4,000 so far.

Of the hundreds of B9 fans who put in thousands of dollars and years of their lives to build their own robots, the word “obsessed” may come into mind. Joyce claims he isn’t an obsessed fan, however. He says of the B9 builders, "Even those who are finished will claim it's never done. There's always something they'd like to make a little better."

And why not? For a childhood dream to come true, especially something as fantastic as a moving, talking robot, nothing should be impossible.

Are YOU a B9 Builder? Want to show off your robot? Just send your picture (below) and better yet, your story. We will post all B9 replicas for all the world to admire. And B9s are all quite AWESOME robots to admire, aren't they?.