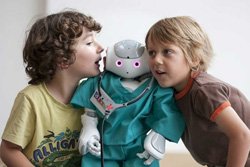 Aliz-E Robot Companion. The problem with robots today is that no matter how cool or fun they may be when you’re interacting with them, they will completely forget about you the next time you see them. So even if you sang and danced and laughed your hearts out that one time, sadly, your robot friend will never remember it happened. Now how can somebody so flighty be a real friend? And more importantly how can robots who forget so easily truly make an impact in children who need it?

It’s been proven that companion robots have the potential to help in the healing process of patients. They have a variety of healthcare applications that include the provision of health education, communication support between patients and healthcare professionals and simply providing entertainment for the patients.

But in order for robots to perform successfully as companions, it is desirable that their interactions with human users are as natural and realistic as possible. Unfortunately, the theory and practice of long-term child-robot interaction is currently an under-developed area of research.

Although social behavior happens in the here and now, real and strong relationships depend strongly on what has occurred in the past. When we interact with others we respond to how they behave in the present, but we also recall experiences in our long-term interactions with them, our social histories. So for companion robots to become truly effective agents in the field of health care, they must be able to maintain long-term relationships with the patient, just like real friends and loved ones do.

European researchers hope to develop a program that would allow robots to interact with human users over extended periods of time: not necessarily continuously, but at least a series of intermittent interactions with humans that can refer back to, and build forth on previous experiences. Aliz-E Robot Companion project (Adoptive Strategies for Sustainable Long-Term Social Interaction) is European Union funded project aimed to explore how “human-robot interactions can be extended from minutes to the scale of days, thus forging longer-term constructive bonds between robot and user.”

The researchers will use the principles of embodied cognitive robotics to sustain believable, “any-depth social relationships” with users, specifically with young diabetic patients in a busy pediatric department at the Ospedale San Raffaele in Milan, as the ALIZ-E project takes pride in taking robots out of the lab and putting them to into the real world.

To be able to succeed, the Aliz-E Robot Companion must be able to establish itself cognitively in the long term. Only an interaction that provides a sense of continuity over long periods of time can provide the foundations necessary for a constructive relationship between human and robot. To do this, the ALIZ-E project will specifically explore robot-child interaction based on children’s open and imaginative responses to these artificial “creatures.” If they are successful, promising applications in the future include the development of effective educational companion robots.

A significant problem in human-robot interaction is that a child’s interest in the robot wears off after the initial novelty. It is important therefore for the robot to have a capacity for adaptivity so that interaction will continue, even if the robot doesn’t display any novel behavior to engage the child’s interest once more. For this, some capacity for memory is necessary to maintain important information about the user and the context. In a game used for an initial case study, for example, an Aliz-E Robot Companion engages the child with four different games, involving both verbal and physical interactions.

The observations gathered lend support to the notion that such a robotic platform could be effective in communicating healthcare information to child users in entertaining and memorable ways. As such, the success of ALIZ-E in this research ultimately means revolutionizing health care and the educational field for children. (The case studies employed, and the ALIZ-E project as a whole, makes use of the Nao small humanoid robot, from French robotics company Aldebaran Robotics, as the test platform. This is controlled using Urbi, an open source program).

Now to build a robot that can remember where you put the car keys.