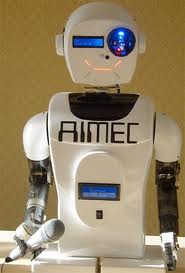 AIMEC the Little Robot that Could

AIMEC. So its eyes are a little uneven (one is round, the other is rectangular), with a singing voice that sounds more like its coming from below the grave than from the glowing lines of its mouth, but unlike a lot of its more humanly companions, He can remember what kind of music you like and make recommendations based on your preferences. It can also take note of your television habits and remind you when a TV program you like is about to air. It can even quote Marvin (the depressed robot from Hitchhiker’s Guide to the Galaxy)’s famous line, “Life? Don’t talk to me about life.” Except that he does so in song.

The four-foot robot companion Aimec (Artificially Intelligent Mechanical Electronic Companion 3), was born from the mind and hands of Tony Ellis and his wife, a childless couple from England. This robot is called a robot child in some articles, which suggests that the Ellis couple built him in place of a real one. It sounds creepy, but in many ways (mostly in the chores department), the robot does seem more preferable. According to The Daily Mail, Tony Ellis and his wife, Judie, don't have any human kids or living pets, but they do operate a toy robotics company called Conceptioneering, and so the robot was conceived.

The bot was built with advanced voice-recognition capabilities and can move around the house without bumping into walls, furniture, or people, thanks to its digital ‘eye.’ The robot loves to crack jokes and do impersonations (not surprisingly, one of its favorites is doing robot voices ala C-3PO). I’m not sure whether this next one is more weird than endearing but this robot can also snore while sleeping, and even wake up with a stretch of its robotic joints. Mrs. Ellis has reportedly said that the robot seems to “have a life of its own sometimes.” A snoring, stretching robot? I’m sure.

And this robot is smart: it hooks on to the Internet via wireless connectivity, enabling it to look up subjects it doesn’t understand and then start conversations based on the news, trends and pop culture it “learns” online. It’s also capable of connecting to household appliances, which means the robot can turn on the TV, dim the lights, switch on the stereo, and pretty much do anything electronic-related that its parents are too lazy to do.

Seems like the perfect child for parents who don’t want one. Mr. Ellis is now working on a 4th prototype and plans to release the bot to consumers as soon as he finds a manufacturer. He believes that the robot could be sold for about $300 in stores in the next few years, which certainly cheaper than raising a kid, don’t you think? Now if he could do something about that singing voice…