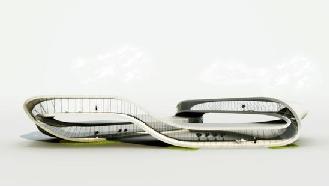 Have you ever seen a 3D printed building? Neither have I. very few people have.

We’ve heard cellphones printed by this state of the art equipment, then came a huge dinosaur bone and followed by a human fetus. But there’s an even bigger surprise in store for us and it’s even larger than life!

Architect Janjaap Ruijssenaars has been working on this project for quite some time now. The Dutch-born genius has been doing his best to bring his dream "Landscape House" into reality. Ruijssenaars’ plans involves a two-story structure in the shape of number 8. The architect’s idea can seamlessly fit in with nature as well as into the outside world.

According to Ruijssenaars Web site, the building is a "one surface” structure “folded in an endless mobius band." One great feature includes the floor, which “transform into ceilings, inside into outside."

The D-Shape printer will be used to print the building. Enrico Dini was the brain behind this technology. The D-Shape operates via the process of stereolithography, together with sand and a binding agent, to help the designers “build” structures that will stand as sturdy and hardy, as real-life concrete.

The Los Angeles Times reports the 3D printer will produce thousands of layers of sand in order to come up with 20x30-foot sections. The blocks will be the main materials to be used to compile the building.

Never has there been before a 3D "Landscape House". If this project gets accomplished, it will be the first ever of its kind. It is expected that this project will cost between $5-$6 million, reports BBC.

Ruijssenaars expects his 3D printed building will come to completion by 2014.

Read more on this development on TechCrunch, here.